The Spark That Moves 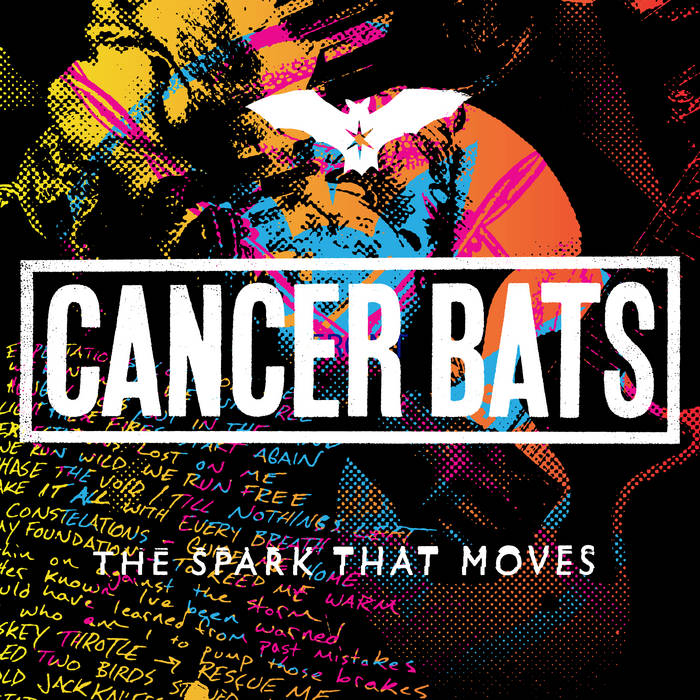 With 13 years under their belt including 5 acclaimed studio albums, three Juno Award nominations and countless tours around the globe, Canadian hardcore metal punks, Cancer Bats have become a well-known force within the world of heavy music. 2018 sees the band embarking on the newest chapter of their career, self-releasing their 6th studio album “The Spark That Moves” on their own label Bat Skull Records. Not only looking to record and release albums on their own terms, but also choosing to forgo the traditional lead ups and teaser singles, Cancer Bats, without any forewarning, released “The Spark That Moves” in its entirety on April 20th, 2018, with vinyl and CDs ready to ship to fans that day.

“We were just tired of waiting,” said front man Liam Joseph Cormier. “We spent all of 2017 working hard on this album, all while playing shows and talking with our fans, who were constantly asking “when can we hear new music!?”. We figured why make anyone wait any longer, let’s just drop the entire new album all at once,” Cormier enthused. “I know as a fan, I just want to hear everything right away, let me buy the record right now! We figured, why not release our own music the way we want.”

This confidence is only matched by the excitement and raw energy coursing through the sonic arsenal that is “The Spark That Moves”. The album was recorded in Winnipeg, Manitoba in the dead of winter, under the watchful eyes and ears of JP Peters (Propagandhi) at his studio Private Ear, and was mixed by long-time collaborator and award-winning producer Eric Ratz, (producer of “Hail Destroyer”, “Bears Mayors Scraps & Bones” and “Dead Set On Living”). This combination of talent that is JP Peters channeling the explosive dynamics of the band and Eric Ratz pushing all levels of performance to their sheer limit, results in an absolutely crushing display of power.

Not only taking a new approach to releasing their music, for their sixth studio album, the band had to learn to adapt to writing in a whole new way, now with drummer Mike Peters living in Winnipeg. Where past albums had all 4 members in the same room every day, for months on end, this time around, with both distance and different schedules being factors, it was everyone sending in ideas and in a lot of cases it was bassist Jaye Schwarzer bringing lots of new ideas to the table. “Jaye definitely set the standard when it came to writing, sending through so many ideas on guitar,” said Cormier. “He would send 16 different riffs over email and call me up to play drums so we could hash out ideas and get things rolling,” Cormier explains “We couldn’t have written this album without Jaye leading the charge.”

“The Spark That Moves” is Cancer Bats at its finest. Combining all of the elements from their last 5 releases, the 11 tracks that make up the album blend together the bands most melodic moments with their most aggressive, becoming a savage sprint of hardcore, punk, sludge, and metal that leaves the listener craving more. Drummer Mike Peters and lead bass player Jaye Schwarzer seamlessly collide together like two wild beasts, while guitarist Scott Middleton blasts his signature layers of squeals and destruction over top. All of this thunderously led by singer Liam Cormier’s now fully formed melodic growl as he fires both positive, inspiring lyrics and scorching damnation as displayed on album opener “Gate Keeper”. Without skipping a beat, they fire on track 2, “Brightest Days”, shifting back to a classic Bats positive party anthem. The record seamlessly keeps this pace of raw, catchy, anthemic, metal and punk. Halfway through it breathes with the melodic standout “Bed Of Nails”, a touch of desert rock they add into the mix before diving back into the chaos that is “Head Wound”. This pace continues right until the crushing album closer “Winterpeg”, an ode to the very city they recorded in, featuring guest vocals from Chris Hannah of the legendary Winnipeg punk band, Propagandhi.

Cancer Bats are now truly ready to take on the entire world with their new album “The Spark That Moves”, a record written and released for the band and fans to lay waste to stages everywhere, an event not to be missed!

Bandcamp Daily  your guide to the world of Bandcamp